What You Should Know about Maryland Potholes 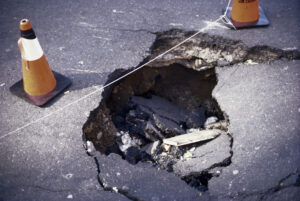 You may have noticed that this spring was pretty bad for potholes. The highways were full of them and some side/back roads were even worse. Avoiding potholes can be complicated, but it’s very important to do as it can cause really bad wear and tear on your vehicle – especially on your tires and suspension system. Have you ever wondered why potholes are such a big problem after a particularly rough winter? It’s all about how and why potholes form.

Some potholes get pretty big in the springtime and when it rains can be filled, making them difficult to see (and avoid). There are some things that you can do to avoid vehicle damage due to potholes:

If your driveway or roadway has suffered pothole damage, now is the time to get it fixed. Atlantic Maintenance Group offers asphalt repair in the Baltimore area. Give us a call at 410-768-4720 or contact us via our website today to get a quote or learn more about potholes.

This entry was posted on Friday, June 13th, 2014 at 4:53 pm and is filed under Asphalt . You can follow any responses to this entry through the RSS 2.0 feed. Both comments and pings are currently closed.